TerraDesic is a newly formed, international cooperative network of scientists, engineers, and other technology associated academics and professionals.

The primary goals of TerraDesic to deliver a financial benefit to its Innovative Team Membership are to:

In general, the purpose is to eliminate those factors that inhibit designed technology from reaching the needs of the community, and providing the Innovator appropriate ownership and financial return for the creative weight of their contributions throughout the entire market life of an innovated product.

By streamlining the process of concept, design, prototype, and manufacture to include the Innovators as the primary owners throughout this entire process, and maintaining a focus on accessible, feasible, economy-of-scale technology …
real community needs can be met, and artificial profit considerations left out of the creative equation.

How does it work (in brief)?
(1) It begins with a Hypothesis. A proposal of a method, technique, principle that can be applied to a tangible solution.
It could be a singular construct, or it could be based on creating a “synergetic energy chain”.
An example might be: “Photovoltaics, Hydrolysis, and Steam energy can be used for an electrical and heat source for homes, small businesses or farms.”  OR  “High Level Airborne Ammonia Agricultural Environments can be relieved from emitting into the earth’s atmosphere, through a capture/distillation method, whose by-product is potentially a fertilizer”. OR
“Remote off-the-grid oxygenation/nutrient remediation “water robots” can operate in sensitive remote water areas to offset the effects of chemical runoffs or other man-made imbalances.”
Not only the assumption of method is proposed, but general constructed scale and implemented category is defined, so that manufacturable finished “goods” are part of the mandated parameters.
The source of these proposed Innovation Projects comes not only from the TerraDesic leadership, but from Terradesic Member Forums, and submitted projects from individual TerraDesic Members.

(2) Hypothesis determined to be of merit are defined and prepared to be presented to the entire TerraDesic primary membership, as essentially a Request for Proposal (RFP). Members interested in participating on a Team submit a Bid, including their qualifications for their intended contribution, a defined set of Deliverables ….. And ……. The percentage of co-ownership of the intellectual property, and any revenues returns from, but not limited to licenses, royalties, manufacture, or sale of patent.
A team is chosen by TerraDesic, and Team Members are individually issued a formal “Warranty” or legal promissory for their I.P. ownership, which is fully executed when an individual has fulfilled their deliverables. Upon completion of the Innovation Project, TerraDesic files a Utility Patent on the Team’s behalf (Team Members are registered as documented Co-Inventors and Co-Owners) … and TerraDesic begins the process of evaluation and organizing the funding for Prototype constructions, and marketing.

(3) The project becomes Active, and Innovation Team Members receive a monthly statement and progress report for their individual project that includes a financial accounting for revenues received, and any cash residuals to be distributed to team members in that month, or projected for subsequent months.

Who are TerraDesic Members?
Members are categorized as Primary, Associate, Commercial, and Classroom.

But only Primary Members can actively participate in projects and forums. The Primary Membership is limited to scientists, engineers, and technology academics and professionals, who have submitted a very basic application for membership and their qualifications accepted as valid.

TerraDesic membership will be limited to a modest $35 USD per year, and has part of the startup membership campaign, qualified members will be provided a 60 day free membership.

Snapshot of “How It Works” 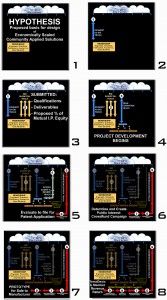